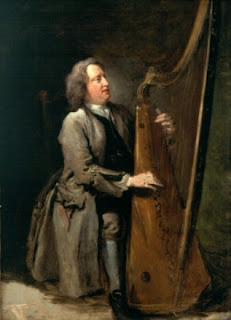 Hogarth was internationally famous for his moralistic prints of low life (the best known of which formed the series 'The Rake's Progress)', but he was also undoubtedly Britain's finest 18th century painter
This splendid portrait of a harpist 'in action' enlivens the walls of Aberdeen City Art gallery. A wonderful sense of movement is conveyed by the sketch-like quality of the painting.
The harp is here being played by David Lewis, the blind harpist to George II and one of a group of Welsh harpists who worked in London in the middle of the 18th century - amongst whom John Parry (the most famous) and Williams Williams were also blind. The instrument rests on the left shoulder as was traditional for the Welsh triple harp.
Hogarth worked in similar London circles to those frequented by the composer Handel, his older contemporary. Both were involved with the theatre and spent time working for the Foundling Hospital charity (Hogarth was a founding governor and exhibited his pictures there, while Handel gave benefit performances of his works in the chapel). The artist and the composer also both enjoyed royal patronage.
Handel's Concerto for the Harp was written in 1736 for performance in Covent Garden Theatre, and the instrument pictured here would have been similar to the one the composer wrote for.